“Cast your cares on the Lord and he will sustain you; he will never let the righteous be shaken.  But you, God, will bring down the wicked into the pit of decay; the bloodthirsty and deceitful will not live out half their days.  But as for me, I trust in you.” 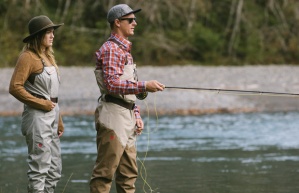 My husband is an outdoorsman. For much of our courtship and engagement, I was spent with me traveling for up to two weeks of each month.  We had somewhat of a long-distance relationship.

When I was home, we would spend all of our free time together.  When I was traveling, the deer and the fish took my place.

When we got married and started putting all of our things in our new house, I was a little surprised at the number of fishing rods and deer heads in my home.  It was then that I learned that you “need” a different rod to fish in the river and a different one to fish in the ocean.  Another type would be needed for the lake.  I think it is safe to say that he has always had more fishing rods than I have had pairs of shoes.

One time during our courtship, Dustin decided to take me fly-fishing (which also needs a different type of rod).  He brought me waders (waterproof overalls) and wading boots (strange little hiking boots with felt bottoms) and of course, my own rod because we could not share.

I waded out to the middle of the river that was not warm.  I might not have been wet, but I could detect the water temperature through my waterproof overalls, I mean waders.

Dustin put a fly on the end of my fishing line and then proceeded to show me how to cast my fly into the water.  The further the line went the better or so I am told.

I played around with that spool and reel and I figured out how to cast like a pro in waterproof overalls.  But Dustin has always been able to outcast me…I guess we will still be competing for the title of “Best Caster’ when we are old and gray.

But the idea of casting is interesting.  You have to do it again and again and again.  When you cast your fishing rod, you have a chance of getting a fish, but no promise of one.

For the record, when I fish, I tend to cast my line over and over again with rarely any reward on the end.    But I don’t give up…I am told that the trying is part of the fun.

In order to cast my cares on the Lord, there are a few things I try to do regularly.

You can trust in the Lord and keep casting your cares on Him.  The Lord will sustain you.  He will never let you be shaken.  You may have to cast them over and over and over again, but He promises to never leave you.  Believe in that promise today.

6 thoughts on “That Time Dustin Took Me Fly Fishing…”